‘Black Panther’ Mania: Dissecting the weird, wonky, and wrong as Black folks obsess over the movie of the year

Every Marvel film is, by default, a nerd film. Any nerd film will always be discussed and dissected ad nauseam, normally by mama’s-basement-dwelling types banging on their keyboards with the frustration of a dude who has a tenuous-at-best history with the females of our species.

But with Black Panther, there are Inception-level layers of scrutiny at work, primarily because it’s a nerd film that also happens to a) be the grandest and most anticipated film with a primarily Black cast and Black director; and b) one with big ideas that are questionable in their execution.

It should come as a surprise to no one that folks Uber X’ed from the theaters after the end credits as fast as they could to rattle off their thoughts for all on the internet to see and discuss. I’d be very surprised if the film didn’t break yet another record this weekend for eager-ass writer-types churning out their thoughts at a rapid clip.

I’ll bet anything that much of the Thought Police is coming from people who knew nothing about the 52-year-old comic book character before he made an appearance in 2016’s Captain America: Civil War. But that hasn’t held up the eye-rollingly effusive hot takes from all sides.

Folks are pissed that Martin Freeman’s character is a sympathetic white CIA agent working with the Africans. Folks are pissed that they don’t know exactly what to do with Michael B. Jordan’s Erik Killmonger. And heaven forbid you publicly say anything negative about the film while being Black – you might as well be Clayton Bigsby draped in an All Lives Matter t-shirt.

Instead of throwing my hat in the ring and adding onto the shitpile of think pieces, I figured I would round up some of the more interesting (and ridiculous) takes I’ve read since the film’s release.

Like, how dare director Ryan Coogler not put a sociology dissertation-level amount of detail on white supremacy, colonialism, and Pan-Africanism in his 134-minute Disney film! Wild-ass, hyperbolic takes like this make me wanna pop a couple Aleve and flush my iPhone down the toilet.

Super “woke” Black folks aren’t the only ones not buying into the Black Panther hype. This piece from The Guardian is pure hatred from the non-American (and thus less relevant?) perspective. The author writes, “And yet there is no escaping that the plot is lame, the battle scenes routine, the drama as dark as summer in Lapland and as taut as cotton wool.” Even most of the opponents of how the film handled its content agree that it’s a good movie. Away with this trash. 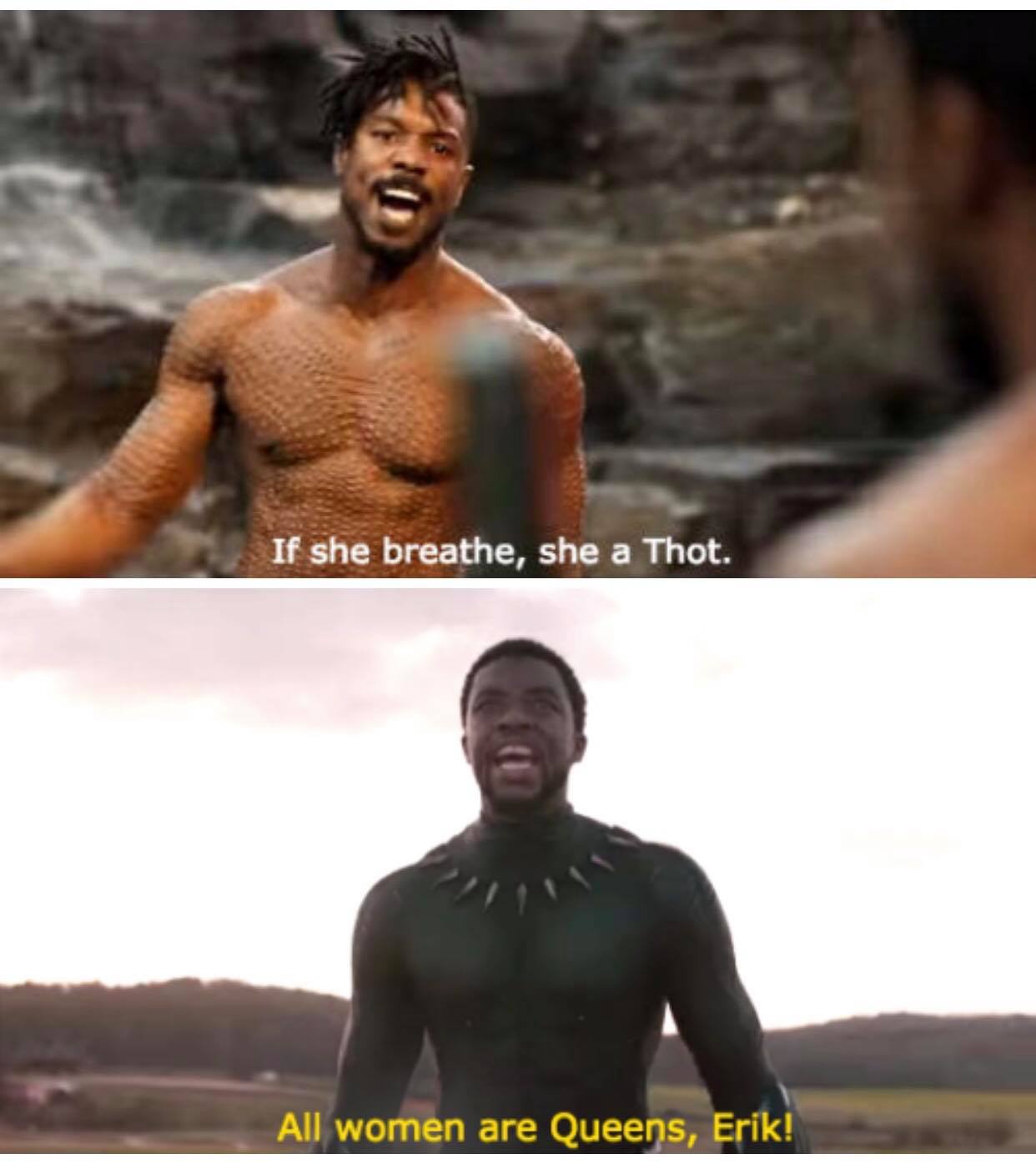 It was absolutely not lost on me that many sistas were #TeamKillmonger over the weekend despite the character’s murder of two Black women and choke-out of one black elder. Thing is, loving the murderous bad guy is pretty standard in cinema (see: Heath Ledger’s Joker), so when you take Killmonger in his entirety, I’m not sure it’s fair to reduce people who loved him as Kodak Black-esque sista haters. But then, I’m not a Black woman.

Black Vegetarians Get Some Shine

Coming from out of left field, food culture site Eater dissected the funniest scene in the film in which Jabari tribe leader M’Baku threatens to feed a white outsider to his kids before chuckling about how they’re all vegetarian. The take is that the scene pokes fun at outmoded, racist filmmaking that used to make black and brown non-Westerners culinary “savages.” This one is interesting, and I’ll allow it.

Black Panther is a Revolutionary Moment for Black Mental Health

I actually read a think piece that calls Black Panther a “revolutionary moment” for Black mental health, as if watching it washes away the daily emotional toil of being Black in America. The article also suggests that the residents of Wakanda were free of depression and anxiety disorders, because I guess the writers polled all Wakandans. If Barack Obama hitting the White House wasn’t a “revolution” for our black health, I’m pretty sure a Disney movie won’t singlehandedly do the trick.The Soundtrack Has to Be

The Soundtrack Needed Artists from the Motherland

The Kendrick Lamar-produced soundtrack for Black Panther received lots of praise when it dropped in advance of the movie. However, some folks have suggested that the soundtrack of an Africa-based film missed the opportunity to have more representation from African artists instead of being the largely basic-ass rap album that we got. A writer from Noisey says, “[the] soundtrack would obviously perform better commercially in this country than an all-inclusive collection of music from within the African diaspora. The unfortunate part of the situation is that we’ll never know if the latter would perform well.” A soundtrack for a massive mainstream film with a bunch of artists unknown in America…? Yeah, I can answer that for you, fam.

If you’re Black, bougie and under 40, you’ve found your next brunch topic until at least Memorial Day. The think pieces, memes, and tweets will not be stopping anytime soon and they are sure to get even weirder, wonkier, and side-eye inducing.

Dustin J. Seibert is a native Detroiter living in Chicago. Miraculously, people have paid him to be aggressively light-skinned via a computer keyboard for nearly two decades. He loves his own mama slightly more than he loves music and exercises every day only so his French fry intake doesn’t catch up to him. Find him at his own site, wafflecolored.com.

The post ‘Black Panther’ Mania: Dissecting the weird, wonky, and wrong as Black folks obsess over the movie of the year appeared first on theGrio.