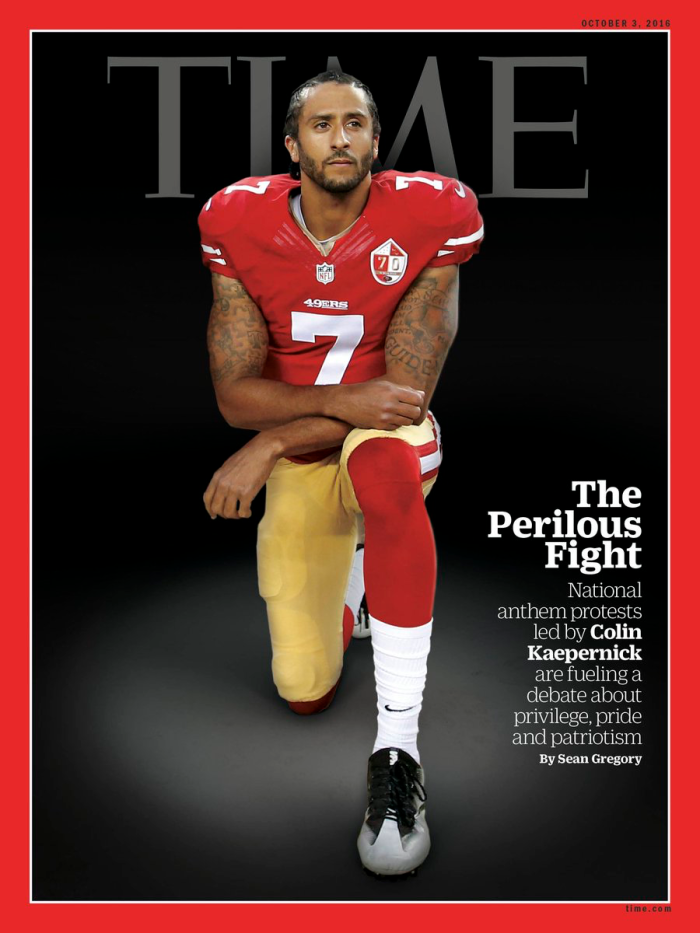 Say what you want about San Francisco 49ers quarterback Colin Kaepernick’s method of protest, it’s certainly been effective. He’s got kids as young as middle schoolers taking knees during the national anthem. He’s pledged to give $100,000 a month to community charities and has gotten people such as Seattle Seahawks cornerback Richard Sherman to walk out of news conferences due to frustration with how black people are treated by police. Retired NFL running back Marshawn Lynch made his point on national television, too.

Now, Kaepernick is on the cover of the October issue of TIME magazine. My man is all the way out here. While Carolina Panthers quarterback Cam Newton is making statements in Wingdings on Instagram, as people are getting killed in his very city, Kaepernick is openly discussing the concept dying for the cause and his preparation for said potential. Per his own words, he’s ready to die.

“To me, if something like that were to happen, you’ve proved my point and it’ll be loud and clear to everyone why it happened. And that would move this movement forward at a greater speed than what it is even now,” he said. Now, we’re waiting to see what the NBA is going to do once its season starts. It’s a real concern for league commissioner Adam Silver.

Kaepernick has shaken up the NFL with his protest. He’s made the act of just wearing his jersey an act of defiance. He’s used the biggest tool the league has — the shield — and made it a symbol of demonstration. Teenagers are getting sent home from work, just for wearing his jersey. He’s weaponized his work outfit for good. The impact of this man’s actions are in no way misguided or unheard of at this point. People are still getting killed, people are still fed up, and he’s still kneeling.

Without playing a down this season, he’s become the most impactful backup the league has ever seen.