David Ortiz plays in his final All-Star Game In his 10th appearance ever, Ortiz got a joyous sendoff | African-American News and Black History Skip to content
Tags

David Ortiz plays in his final All-Star Game In his 10th appearance ever, Ortiz got a joyous sendoff

David Ortiz plays in his final All-Star Game In his 10th appearance ever, Ortiz got a joyous sendoff

Before the 2016 MLB All-Star Game, Miami Marlins pitcher Jose Fernandez promised that if he got a chance to face his favorite player growing up, he’d groove three fastballs down the pipe to Boston Red Sox slugger David “Big Papi” Ortiz. When Baltimore Oriole Cal Ripken ripped a home run off Los Angeles Dodger Chan Ho Park in his final All-Star Game (2001) many thought Park grooved one for Ripken out of respect, even though Ripken has denied it. Fernandez? He wasn’t going for subtle, even telling ESPN’s Eduardo Perez before the game Tuesday that he had worked out hand signs with National League starting catcher Buster Posey to make sure Ortiz got his fastballs.

After grounding out in the first inning, Ortiz stepped to the plate in the third inning with the bases empty and one out. Fernandez was now pitching. But instead of Ortiz cranking a bomb to the outfield, Fernandez threw a collection of pitches that were too fast (95 mph) or too slow (80 mph) and he ended up walking Ortiz. As the Boston Red Sox slugger said, laughing, after the game, “I was supposed to hit a home run in my second at-bat. My boy told me that he was going to throw me nothing but fastballs, and the first pitch was a changeup I saw. We gotta discuss that later.”

When he was pulled from the game after walking against Fernandez, the crowd roared and the entire American League dugout emptied to come dap up Ortiz and pay respect to the man, who was making his 10th and final appearance in the All-Star Game.

Game stopped and AL teammates come out to greet Big Papi after he walks and is replaced by pinch-runner in 3rd inn. pic.twitter.com/HJmbevW8k4

Big Papi on coming back: "There's no way when you're at the beach, having a beer, watching the waves that you want to go back into the gym"

Miguel Cabrera on David Ortiz: “He’s everybody’s big brother. How would you feel if your big brother was leaving?”

Before the game, a collection of players, including Washington Nationals outfielder Bryce Harper and Baltimore Orioles shortstop Manny Machado, discussed what Ortiz meant to them: 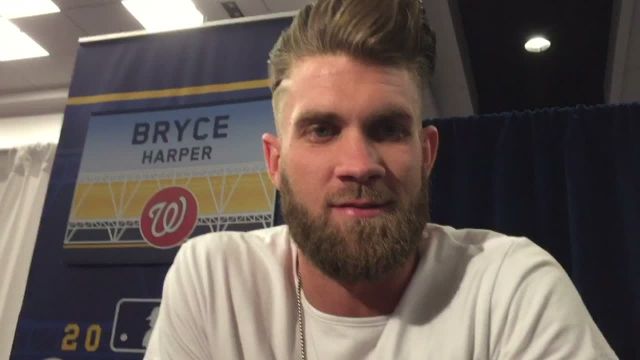 Never mind having a “good” final season – Ortiz is having an elite year for any player, by any stretch of the imagination. He leads Major League Baseball in jersey sales and his on-base percentage plus slugging percentage is an absurd 1.107, his highest number ever, if it holds. It wasn’t always this glorious and glamorous for Ortiz. As ESPN’s Howard Bryant wrote recently, Ortiz overcame enormous odds and bigger doubt. And he made baseball fun again – with ease.