Things did not get off to a great start for All Eyez On Me, the Tupac Shakur biopic that had been hotly anticipated for years. Ever since the death of Shakur’s mother, Afeni, last May, there were concerns about how her son’s legacy and likeness would be used. She was the main gatekeeper of his message and identity after he was killed. The main concern was that the movie would either just be awful or, perhaps worse, counterfactual or ahistorical. Turns out, it was a bit of both.

Now, Kevin Powell, a former hip-hop journalist who is now an author and public speaker, says he plans to sue the producers and writers of the film, effectively for lifting his work with no compensation. He issued a statement Friday on Facebook. 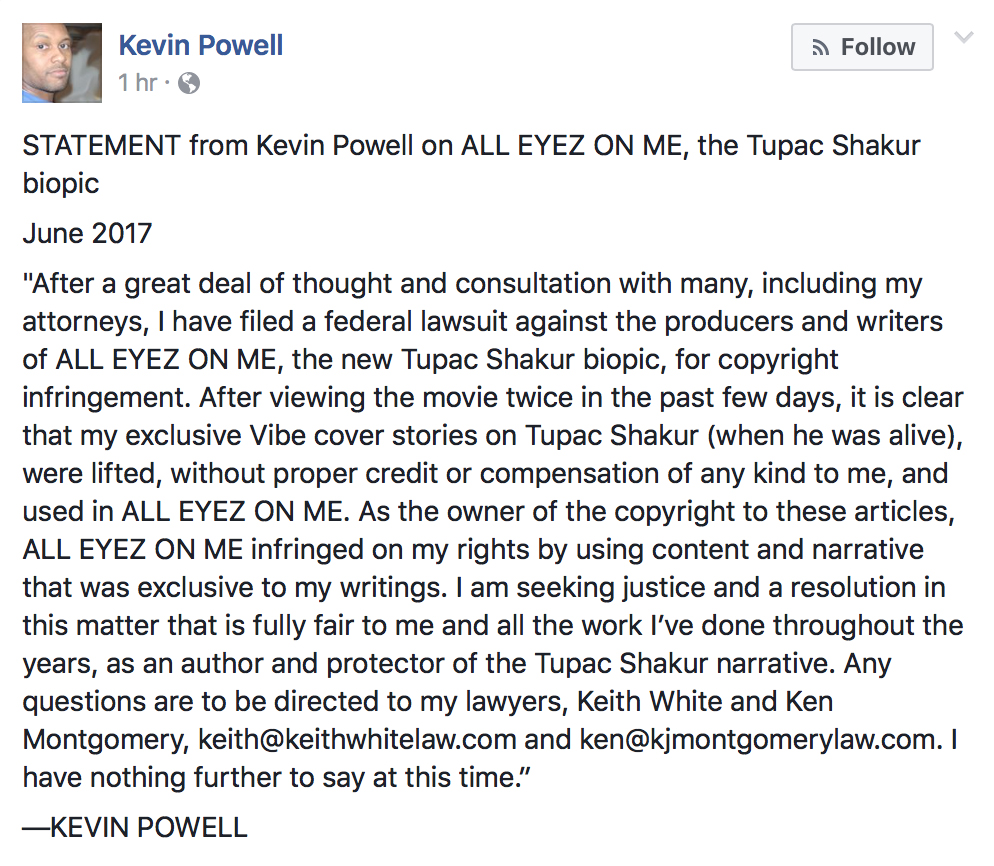 This is nothing short of a deathblow to this film, from a credibility standpoint. When it was first released last week, the debut was marred by the fact that Jada Pinkett Smith, Pac’s longtime close friend, basically said that most of the on-screen relationship in the movie was a lie. She was understanding and graceful about her misgivings, but everyone understood that without her cosign, nobody could take it seriously.

Which was unfortunate more than anything. We all wanted to love this film. It many respects, it was more important than some of these other biopics because of, obviously, the subject of the film. No one wanted to know that the actual people involved in his life didn’t respect it or like it.

To follow that up, legendary movie director John Singleton said the biopic was worse than Lifetime’s attempt to document Aaliyah’s life, career and death — widely considered a complete mockery of her history. Mind you, Singleton was supposed to direct this Tupac movie, so his shade comes with a tad more bias than most. Nonetheless, it’s been one thing after another for director Benny Boom on this flick. All Eyez On Me earned $27 million its first weekend and is in theaters now.

But along with this accusation came an admission that fundamentally affects the overall lens through which we see Tupac’s life. In his complaint, Powell basically admits that he made a decent portion of those stories up, including a central figure who appears in the film named Nigel. Talk about awkward. No one wants to see their work get stolen, but to basically say the reason you knew why is because they passed on a lie that you created has to be a sinking feeling.

Whether or not Powell wins this case I don’t know, but if one of the central pieces of canon in the legacy of one of our most celebrated artists is based on a lie that even he didn’t know about, what are we to believe overall? Now we know why Afeni fought so hard to keep her son’s truth in the forefront.