Koby Altman went unnoticed two weeks ago as countless fans walked by while he stood near the concession stands during a Las Vegas Summer League game. By the time the 2017-18 NBA season concludes, the new Cleveland Cavaliers general manager might be one of the most recognizable executives in sports as he attempts to figure out how to keep from losing his two battling superstars, LeBron James and Kyrie Irving.

“This thing is not broken. We are a very successful organization, and we’re going to continue to drive for that success,” a glass-half-full Altman said during his introductory news conference Wednesday in Cleveland.

James and Irving had their arms around each other as they walked to the visitors locker room after the Golden State Warriors eliminated the Cavaliers in Game 5 of the 2017 Finals. The big question at the time was who could the Cavs add during the offseason to compete with Kevin Durant, Stephen Curry, Draymond Green, Klay Thompson and the rest of the Warriors. Now, that question has been overshadowed by the soap opera the Cavaliers quickly fell into this offseason. 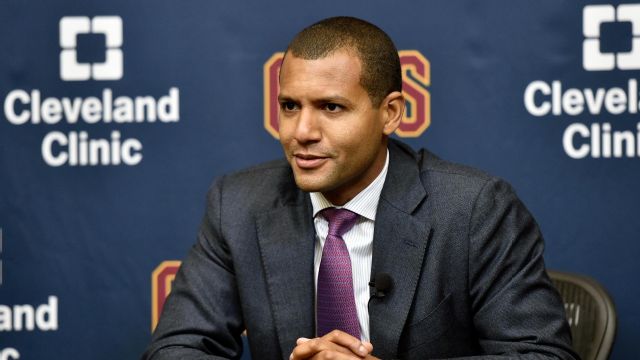 “I don’t want to talk about it. It’s a fluid situation,” Altman said.

A year ago, Cavaliers fans were sticking out their chests in celebration of their first NBA championship. Now, the Cavaliers have hired Altman as the NBA’s third current black general manager with a cloud hanging over the franchise. Despite the storm, the baby-faced 34-year-old put a positive spin on it all.

Altman said the James-Irving feud was “overblown” by the media. Altman mentioned that he signed Rose on his first official day on the job and that the media should be talking more about the franchise’s offseason additions. Altman also told reporters that the Cavaliers will keep things “in-house” on Irving.

“A lot of it has been overblown,” Altman said. “I think the people who are in this building every day haven’t seen any of that animosity. This is, along with [forward] Kevin Love, this is a group that got us to three straight Finals and won an NBA championship together. They play great together on the floor, and a lot of that I do think is overblown. We haven’t seen a lot of that ‘animosity’ that’s been out there in the media.”

Altman added that James, whom he described as “the best player in the world,” remains “deeply committed” to the Cavaliers and wants to compete for championships there “for years to come.” It remains to be seen whether King James is in Cleveland for years to come. Magic Johnson could be saying the same thing about James if he becomes a Laker next summer. The Cavaliers are at risk of losing the four-time NBA MVP for nothing, just like the Oklahoma City Thunder did with Durant a year ago. James has a no-trade clause in his contract, and ESPN.com’s Chris Haynes reported that James has no intention of going anywhere next season.

Another daunting challenge for Altman will be dealing with the Cavaliers’ hands-on owner, Gilbert, who sat next to him during the news conference.

Altman tried his best to dodge questions about Irving and George. Gilbert, being Gilbert, said the Pacers could have acquired more than what they received in their trade with the Thunder for George. The Pacers dealt the four-time All-Star in late June for guard Victor Oladipo and forward/center Domantas Sabonis. ESPN previously reported that the Pacers turned down a trade sending George to Cleveland, Love to the Denver Nuggets and Nuggets guard Gary Harris and the No. 13 pick of this year’s draft to Indiana.

“I will say Indiana could have done better than they did,” Gilbert said.

Altman expressed pride and humility in becoming the Cavaliers’ general manager. He added that being an NBA general manager is “one of just 30 jobs” at the position. Altman joins Perry and the New Orleans Pelicans’ Dell Demps as the only black general managers in the league.

“These are unbelievable opportunities,” Altman said.

Altman’s introductory news conference had little to do with him and much more to do with James and Irving. The first question was about Irving, not the new general manager with an interesting background. We did learn that the Brooklyn, New York, native was a star point guard at Middlebury College in Vermont. He has a master’s degree in sports management from the University of Massachusetts, has been an assistant coach with Columbia University and worked for USA Basketball. Gilbert even oddly pointed out that Altman was raised by a single mother. Altman came to Cleveland in 2012 and was promoted to Griffin’s assistant last summer after the Cavs won the championship. He is the Cavaliers’ fifth general manager since 2005.

Wednesday was the news conference. Thursday was the return to reality in which Altman will be expected to trade Irving, who isn’t likely to budge from his demand. While landing the general manager job for a team that went to three straight NBA Finals may seem like a dream come true, the nightmare for Altman is he could well be the general manager when Irving is traded and James breaks Cleveland’s heart again by leaving. Altman will likely trade Irving despite thrift-seeking suitors knowing he wants out, and he will likely be forced to keep the free-agent-to-be James, who won’t waive his no-trade clause. And if both are gone by the summer of 2018, good luck getting any major free agents to Cleveland.

With the franchise-altering challenges heading Altman’s way, perhaps he stayed so positive Wednesday to keep himself and Cavaliers fans from panicking.