Undefeated football plays of the week: Week 4 See what dope highlights you might have missed | African-American News and Black History Skip to content
Tags

Undefeated football plays of the week: Week 4 See what dope highlights you might have missed

Undefeated football plays of the week: Week 4 See what dope highlights you might have missed

Last week, football included some huge hits, great moves and one Spider-Man-like interception. It was a full week of redemption for some teams and just plain old showtime for others.

The Minnesota Vikings are now 4-0 after pulling off a 24-10 victory over the New York Giants. The Vikings forced an interception on Giants quarterback Eli Manning and held him to 261 passing yards. They also kept wide receiver Odell Beckham Jr. at bay, leaving him with a career-low 23 receiving yards. Minnesota did all of this without running back Adrian Peterson or quarterback Teddy Bridgewater, who are both sidelined with knee injuries. The Vikings might just have one of the best defenses this season. It’s not up for debate. Not yet, at least.

This is all fine, but there were no real highlights on the field to focus on. And that’s because the ball boy overshadowed everything and everyone with a one-handed catch of the night from the sidelines.

Catch of the night?

This ball boy earned that honor. With ONE hand!

Need this ball boy on my fantasy team after the week that DeAndre Hopkins and Odell Beckham Jr just hadhttps://t.co/xWVbddPu09

The Michigan Wolverines were able to hang on to a 14-7 victory over the Wisconsin Badgers. It was thanks to this clutch interception with the game on the line by Wolverines senior Jourdan Lewis. 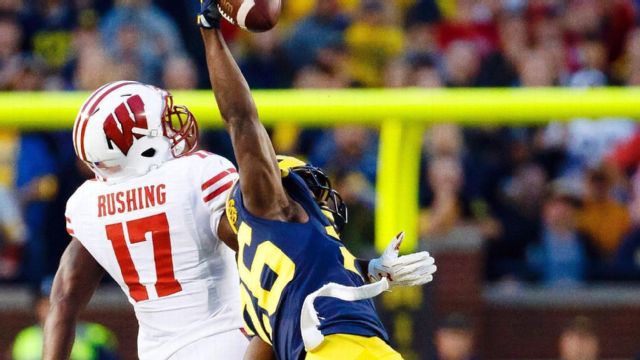 No defender ever has made a better catch than this one from Michigan CB Jourdan Lewis. https://t.co/8liAnXxnCU

Jourdan Lewis for sure got interception of the year

A few photo-edited images were even made from the play.

The Lions could really use a guy like Jourdan Lewis. pic.twitter.com/ZaqWBQotZ4

Tennessee was down by four with four seconds left and one more play to go. Then the Volunteers pulled off the most miraculous play of the season — the Hail Mary of all Hail Marys.

The Hail Mary that won the game for #Tennessee!! #TENNvsUGA pic.twitter.com/PPB9rhYPOz

Tennessee quarterback Joshua Dobbs sent the ball off to Jauan Jennings, who made an amazing grab for a Vols win. The great play from Dobbs and Jennings gave Tennessee a 34-31 victory over the Georgia Bulldogs.

Woke up this morning and still confused as to how you can't cover a Hail Mary.

This semester is the last four seconds of the game, and I need to be Jauan Jennings.

University of Nevada-Las Vegas quarterback Dalton Sneed was somehow able to escape the rush to turn a sure safety into much more. He launched the ball to Lamar Jackson and the 91-yard touchdown was worth the mention. The freshman shined bright under the college lights. Sneed led the Rebels to a 45-20 victory over the Fresno State Bulldogs.

That’s even hard to do in Madden (unless you play with the game sliders altered).

It even had other players talking.

Here’s one of those plays:

How would you name this @juliojones_11 75-yard TD?

Jones made history Sunday — what a spectacular outing by one of the best receivers in the league.

Julio Jones: Only the 6th time in NFL history a player has recorded (300) + receiving yards in a single game

Julio Jones got the Falcons soaring, but there are still doubters. https://t.co/JVWpE8JBsF

He wasn’t the only wideout to cook a defense this week. His draft partner A.J. Green led the Cincinnati Bengals to a 22-7 win over the Miami Dolphins with 173 receiving yards.

Denver Broncos cornerback Aqib Talib is one of the best in the league, and he reminded everyone of this on Sunday when he picked off Tampa Bay Buccaneers quarterback Jameis Winston not once …

This Jameis Winston pass did not go as planned…

This had the social media timelines talking, too.

… Still early in the second quarter.

Talib also got to show out against the Buccaneers, the team with which he started his NFL career. Well done, Talib.

To be able to ball out against an organization where you started is truly a blessing! Im willing to bet Aqib Talib would agree with me!

Richard Sherman gets the double

Not to be outdone by Talib, Seattle Seahawks cornerback Richard Sherman had a day, as well, garnering two picks off of Ryan Fitzpatrick as the Seahawks beat the New York Jets, 27-17.

Fitzpatrick gets picked off by Richard Sherman. Again. https://t.co/vAKuKWPxma

Be sure to check back next week for more Plays of the Week: The Undefeated Edition.