Undefeated football plays of the week: Week 5 See the dope highlights you might have missed | African-American News and Black History Skip to content
Tags

Undefeated football plays of the week: Week 5 See the dope highlights you might have missed

Undefeated football plays of the week: Week 5 See the dope highlights you might have missed

The Tampa Bay Buccaneers came back to beat the Carolina Panthers 17-14. It’s because of a clutch 66-yard drive led by Tampa Bay quarterback Jameis Winston, which led to this game-winning kick by Roberto Aguayo.

However, we don’t get to that moment without a momentum-changing play by Buccaneers cornerback Brent Grimes.

Picked off in the end zone!

If yaw really think about, brent grimes saved us

With the Bucs’ backs against the wall, Grimes was able to save the day. Clutch.

The Utah Utes were playing against the Arizona Wildcats. In their 36-23 win, something spectacular happened. The ball rolled off the back of sophomore defensive back Chase Hansen and off the receiver’s foot, leading to a diving catch by Utah Junior Marcus Williams. This might be the interception of the year, folks.

Utah just had an interception that hit multiple body parts from players from both teams. I don't know how else to describe it.

What a catch from Williams. Insane.

In a tie game against Colorado, USC Trojans wide receiver Darreus Rogers decided to do something about this result on this play. Rogers took matters into his own hands, saving an interception in a game that could have gone either way to cap off the 21-17 victory over Colorado.

"I saw the ball in the air and I wanted it more. I wanted this victory for my team."

#USC OL Jordan Simmons on Darreus Rogers' INT-stealing catch: "I saw a dude get his lunch taken away. That’s what happened. It was funny."

His teammate on the other side of the ball, Adoree’ Jackson, had an absolutely spellbinding interception.

This week in "Ridiculous Interceptions," Adoree' Jackson (@AdoreeKnows) gets the foot down in bounds. Wow. #USC #FightOn pic.twitter.com/jdfJOxv2l3

How did this man stay inbounds?

How on Earth did @AdoreeKnows stay in bounds on that INT? OMG.

Yo man, @AdoreeKnows, you are The Truth. One of the best picks we’ve EVER seen.

The two had a nice teammate twitter exchange after the game.

That Catch By @DROG_UNO Tho

This weekend, the North Carolina State Wolfpack’s home field, Carter-Finley Stadium, was turned into a giant puddle. There was so much water that the ball didn’t even bounce correctly when it hit the field. Weather aside, N.C. State was able to fight to a 10-3 victory over the Notre Dame Fighting Irish. The Wolfpack’s wide receiver Pharoah McKever came up with the block and safety Dexter Wright ended up with the ball to give the only touchdown of the game. 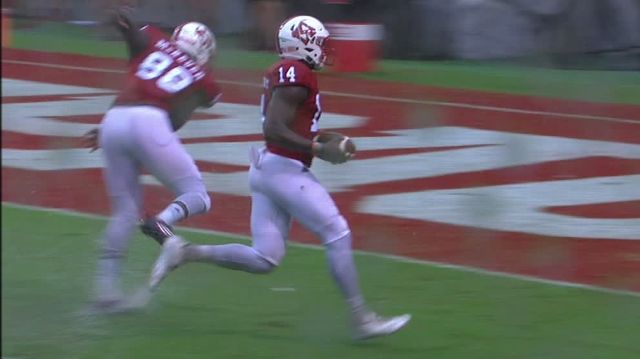 Nc state with the weirdest blocked punt i've ever seen

N.C. State celebrated in a convenient fashion — slippin’ and slidin’.

You can’t tell us that doesn’t look fun.

New England Patriots fans everywhere were beyond delighted that the man they call “Tom Terrific” was back on the field. Quarterback Tom Brady torched the Cleveland Browns for 406 yards and three touchdown passes to tight end Martellus Bennett.

Tom Brady to the rest of the NFL: pic.twitter.com/s3CzZZU7lW

Brad Stevens on Tom Brady: "It's unbelievable what he's able to do."

Mr. Patriot has been here for a while, and ain’t no telling when he’s going to be done roasting defenses.

The Patriots defeated the Browns in a 33-13 victory.

While the New York Jets fell to the Pittsburgh Steelers 31-13, wide receiver Brandon Marshall had the catch of the game. What looked to be another sure interception from Ryan Fitzpatrick (he’s had 10 so far this season), Marshall decided “NOT TODAY.”

How would you name @BMarshall's juggling TD catch?

Creating something out of nothing is what great wide receivers do.

lol Brandon Marshall turns a Fitz INT into a TD

Lol Brandon Marshall just turned a horrible Fitz INT into a touchdown because of course he did.

Jakeem Grant with the quickness

Miami Dolphins wide receiver Jakeem Grant is just a rookie, but he may already be a significant rising star in the league. He added another highlight to his claim with this 74-yard punt return touchdown.

Jakeem Grant is a lot of fun pic.twitter.com/DmkkEg0Se4

Y'all are so sleep on Jakeem Grant