What Had Happened Was: 10/10/16 Oh, you don’t know? We got you. | African-American News and Black History Skip to content
Tags

Game 1 of the WNBA Finals between the Los Angeles Sparks and the Minnesota Lynx was a thriller Sunday night! With the score tied at 76-76, the ball was kicked out to Sparks guard Alana Beard, who knocked down the corner jumper and gave the Sparks a 1-0 series lead. 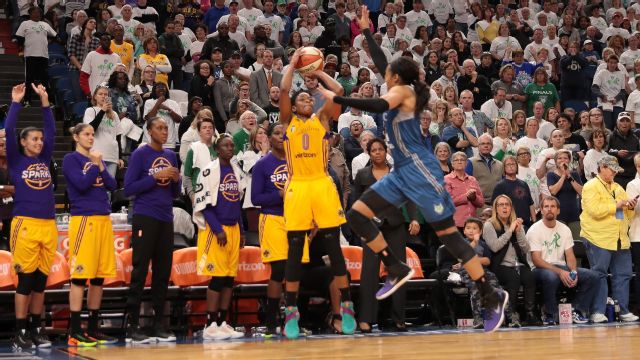 This is going to be a great series.

Some things are bigger than football.

Before facing the New York Jets on Sunday, Pittsburgh Steelers running back DeAngelo Williams stopped and hugged a group of breast cancer survivors who were on the sidelines. If you didn’t know already, Williams dyes his hair pink to honor his mother, Sandra Hill, who died of breast cancer in 2014.

Williams has stood strong in support of breast cancer awareness, even when the very league he plays for fined him for wearing customized breast cancer eye black last season.

"We will find a cure" and the breast cancer ribbon were printed on DeAngelo Williams' eyeblack this month. The NFL just fined him $5757

All of that history aside, big ups to Williams for being one of the leagues faces of supporting breast cancer awareness, because at the end of the day, some things are in fact bigger than football.

For those of you who are fans of Marvel Studios and Luke Cage, Marvel just dropped something hot. Check out this trailer for its next show, Iron Fist.

Danny trained his whole life for this. #IronFist pic.twitter.com/YxD2ZMOzdf

The character Iron Fist is going to be joining Luke Cage, along with Jessica Jones and Daredevil, as the superhero collective known as The Defenders, and people can’t wait.

The new trailer for Iron Fist is lit.
Did I use that correctly?
I did.
Because it's lit.

WARNING: This picture below might make you super impatient for the crossovers because of its pure awesomeness.

With some friends. #Defenders pic.twitter.com/2943u8tjit

Iron Fist comes out March 17, 2017, joining a pretty stacked TV and movie list that you’re going to have to wait on.

Unless you have a time machine. Then take us with you.

Solange Knowles’ A Seat at the Table became her first No. 1 album on the Billboard 200.

Our next president will have to deal with the reality of mass incarceration of black people in America. Ava DuVernay will cover this in her new Netflix documentary, 13th.

The death toll in Haiti is nearing 1,000 in the aftermath of Hurricane Matthew.

1. LIFE COMES AT YOU FAST

*record scratch* *freeze frame*
"I bet your wondering how i got into this situation…… well it all started when megatron retired" pic.twitter.com/EoQ3PQwo5d

It's Yo Vs. Moe, Fool Vs. Dummy, Two Step vs Beat ya Feet pic.twitter.com/FtVRS7qHcH

That joke won’t get old for a while.